FRIST challenges much of the text in the leaflet dropped at addresses in Penzance 7 Jul. The FRIST response is in red below: 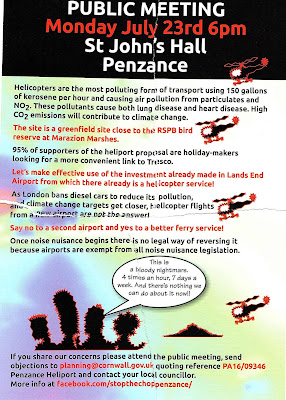 Helicopters are the most polluting forms of transport using 150 gallons of kerosene per hour and causing air pollution from particulates and NO2. These pollutants cause both lung disease and heart disease. High CO2 emissions will contribute to climate change.

The proposed Penzance service will be more reliable than air services from Lands End and it will consume less fuel per passenger than Island Helicopters as it carries 50% more passengers but consumes only 20% more fuel.

Each trip between the islands and Penzance will consume ~50 gallons and carry 12 pax (~4 gals/pax). Many passengers will have burnt as much fuel driving to Penzance by car as they consume on the last 40 mile leg to Scilly. Nobody disputes that a modern, all year around, ferry service would minimize the need for air travel but the IOSSSGp and the author of this leaflet lobbied to prevent public sector investment to achieve this.

The site is greenfield site close to the RSPB bird reserve at Marazion Marches.

The previous Penzance Heliport operated for 48 years without any harmful impact on the Marazion Marshes reserve. A railway line runs through the middle of the reserve and there are busy roads on two sides of it. The helicopter route (past and proposed) does not overfly the reserve. Detailed environmental assessments do not indicate the likelihood of any significant harm.

Lands End Airport is in the middle of an environmentally sensitive AONB and close to an SSI for breeding seabirds. The new Island Helicopter service has commenced without an Environmental Impact Assessment being made public, if indeed conducted at all.

95% of supporters of the heliport proposal are holidaymakers looking for a more convenient link to Tresco.

The proposed restoration of the Penzance helicopter service has the overwhelming support of Islanders. It has the support of the vast majority of Penzance residents despite the Town being close to the flight path. Even the determined efforts of the IOSSSGp, now with the support of the services of John Maggs (professional campaigner), have been unable to change this. The 48 years of continuous helicopter services between Penzance and Scilly benefited both communities and was much missed when it ceased in 2012. The unethical suppression of competition, which is what this campaign is all about, is to be abhorred.

Two thirds of flights from Penzance Heliport will be to St Mary’s, one third to Tresco as in the past. Islanders on Bryher, St Martin’s and Tresco always found the the Tresco flights the most convenient and reliable.

Let’s make effective use of the investment already made in Lands End Airport from which there already is a helicopter service!

The IOSSGp is to be commended for its investment in Lands End Airport. However, the Airport’s location in the heart of an environmentally sensitive AONB, its adverse weather characteristics and poor integration with main roads/rail links & ferry service make it unsuitable for a new helicopter service.

As London bans diesel cars to reduce its pollution and climate change targets get closer, helicopter flights from a new airport are not the answer!

London has public transport alternatives that Scilly does not.

The use of air travel is unavoidable given the limitations of the 41 year old Scillonian III ferry and the absence of a winter ferry service. Air passenger numbers dropped by 38% with the loss of the BIH service damaging the island economy and stranding islanders on Scilly for up to a week at a time when winter weather prevented fixed wing flights. Skybus has not been able to fill the vacuum created by the loss of the BIH service although increased use of the Scillonian has reduced the visitor deficit from 38% to ~20% (50,000 missing journeys/year compared to pre 2006 traffic).
Say no to a second airport and yes to a better ferry service!

Say yes to a better air service from Penzance – a route with a successful 48 year track record. Say no to monopoly and yes to choice. We said yes to a better ferry service in 2010-11 but you lobbied against it.

The AW169 is smaller and quieter than the previous S61. It is operating from the edge of Penzance’s industrial zone and adjacent to the busy A30 dual carriageway. With the new heliport further from housing than the last heliport, the noise problem will be less.

Message from FRIST. Please come to the public meeting at 6pm Monday 23 July at St. John's Hall, Penzance to support the Penzance Heliport.

Many islanders would like to come but may be constrained by the difficulties of travel. If you cannot attend please send a note of your support to planning@cornwall.gov.uk quoting reference PA16/09346 Penzance Heliport and contact your local councillor. If you want a Penzance Heliport you need to speak up.

Sign up to support FRIST and receive periodic newsletters here. Your contact details will not be shared with any 3rd party.